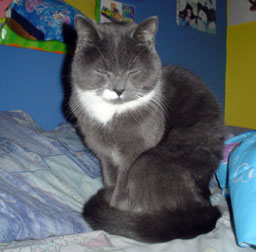 People keep telling me I should stop looking but I have a feel that my cat is still out there looking for me.

This is the thing, I was living in Chambly (rue de Cherbourg, and I moved to 2400 rue Henriette, Carignan around May 2006. I bring my cat and he was really scared. One night he escaped but it was raining, so I guess he lost the scent of home. I try to look for him but could not find him. I saw him in october 2006 not too far from the house. He was dirty and crying when I called him. He recognized me but he was so scared. When I lost him he was about 4 years old. It is a male, he is neutered and doesn’t have claws in the front. I keep putting poster but no one ever called.

I moved during that year again to Montreal. I came back last year and this year to look around and put posters. I never thought of going back to my old house cause it was kind of far and I don’t think he would of gone there. My story might sounds stupid but I really want to know where my cat is.