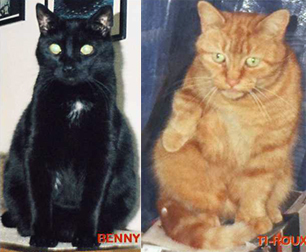 My 2 cats, accustomed to short trips in my backyard, have in the space of 4 months not returned, one after the other? For several years and these 2 cats would occasionally go out for 1 to 2 hours, and did not venture into the streets and alleys. They returned to the balcony in my cabane and I would let them in to eat. They are missing in the St-Michel district, along the Quarry. They’ve both disappeared, on May 1st ’09  Roux, and on September 2nd ’09, the black cat. They are 2 males. We find it strange? Are very concerned given that winter is coming, they will surely suffer …

If you live in St-Michel, Villeray, look around your house and also visit the sites of Berger Blanc and Spca, our photo is there just for the black cat. Here are pictures of the 2 cats!

Message to everyone: I think if a person wants to keep an animal they found, they should at least tell people by email or phone, call anonymously if they’re so afraid, at least we would know that our animals are safe … It is a bad thing for a good!

UPDATE : October 1st: I received a heartbreaking email from Mme Roy last night. Benny was apparently found and turned into Berger Blanc. The people who found him stated that it was cat #686 that was posted on the Berger Blanc website. Rather than calling Mme Roy, they deemed that Benny was too malnourished and dehydrated, and euthanized him immediately.
I have not had any personal experience with Berger Blanc, and can only report what happened. But I think it would be appropriate for the citizens of Montreal to have a choice as to who our contracts are given to, and I would urge those of you who find lost animals, to think carefully, if you have the animal’s best interests at heart. I would also urge those of you who have lost an animal, to be careful, as Benny might not have been brought to Berger Blanc, had his finders not seen his photo on their site. I am truly saddened by this turn of events, and my sympathies are with Mme Roy.