I just got word that John Spencer is home!! He’s a thirteen year old black cat, who was missing in the Mile End/Plateau area since April 30th. I know people in the area are familiar with his posters, and well… they paid off! This is the message from his owner, who’s still in shock I think! 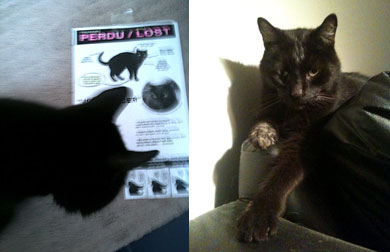 Spotted the night of June 25th, in Outremont Park by a guy named Felix (and his friends), who did not want any reward.

He was also being fed by a couple every other night in the park, I was told (they too eschewed the reward money). He was just sitting by a large fountain, very skinny but recognizably himself. 8 blocks from his home, almost 2 months on his own… crossed many a busy street (Ave du Parc notably) and persevered through weeks of stormy weather…

Pretty good for a housecat that’s never been outside on his own! He is back to his old habits, and is eating, drinking from the faucet, etc. Going to the vet tomorrow, where he will soon have his very own collar and ID tag. Thanks to everyone for looking for him, and sending me leads, messages etc.

I am elated and continuing to pinch myself.

This is great news, no one could be more deserving! I know there was so much effort put in to get him home, and it’s great to see this happy ending. Long live John Spencer!