Cat found in St-Jérôme – home… had been missing since last year! 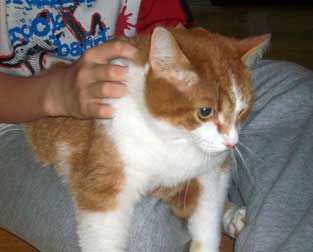 Shortly after posting this I received an email to let me know that this kitty had found his family after having been missing since last year. It is quite a remarkable story, this from Nansy (from French) :

It’s really a story of incredible luck. We posted signs and my son told me his friend who lives 2 km from our home had lost a cat last year. I never thought… we went to pick up the child who said “I think it’s mine” and his father confirmed that he was, despite the fact that he was a lot fatter (probably fed by someone or else he was really resourceful, because he was a stray cat they had neutered and adopted into the family some years ago. In addition, he is declawed). Since he had an accident with his tail and markings on his face, there was no mistake. One small problem, they only wanted 2 cats but a third came a few months ago, and was operated and adopted. Today, with the return of Buzz they have 4 cats and 1 dog. Cohabitation remains to be seen but I know that the cat is not in danger, although he is a wanderer according to the father. I am very pleased to have made a child happy, and it’s really not a good time to find a home for a cat. I couldn’t keep him because he is declawed.

Fingers crossed that he finds his place within his family. What a story!