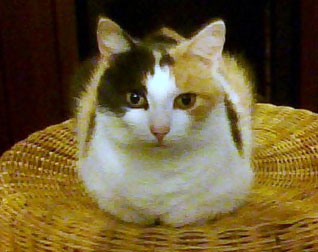 My cat is an escape artist and managed to get out on the night of June 30th, haven’t seen her since. She answers to the name “Molly” and she’s a bit aggressive – may growl and hiss at you but she won’t bite. She escaped a couple of months ago but was on my porch in the morning. She is a rescue cat, about 5 years old, spayed and declawed on her front paws. She’s never had kittens but still has a belly that hangs. Has a nick on one of her ears – happened before I rescued her, not sure if it’s from a fight or frostbite. She took off between Desnoyers and De Courcelle, near Elpro. Starting to worry that she may have been frightened into someone’s moving van.