Lincoln and Amber – safe and sound – bravo to the citizens of Montreal! 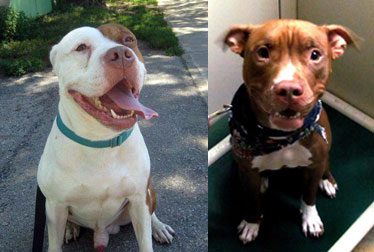 These two dogs that were stolen from the SPCA have been found!! Hopefully more details to follow soon! Thanks to everyone who shared! Here’s the message from the SPCA :

Montreal Sep. 8 2011 – The Montreal SPCA’s inspection department retrieved the two stolen pittbulls, Amber and Lincoln, earlier today. Working on an anonymous tip from the public our inspectors were able to determine the likely building where the animals were being kept. “We are overjoyed to have these two dogs back” said Nicholas Gilman, executive director of the SPCA, “people who are willing to steal dogs usually don’t draw the line at other illegal activities.” 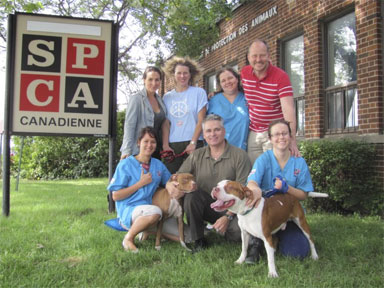 The dogs are being examined by the SPCA Veterinary team to ensure that they have not been harmed by their ordeal. “Our first concern is with the dogs health and welfare,” said Alanna Devine, Director of Animal Advocacy, “this episode has led to a tightening of security and staff and volunteer procedures to ensure this doesn’t happen again.”
The SPCA would like to thank Montrealers who posted, blogged, tweeted and kept an eye out for these two guys. The effort of the public and SPCA staff and volunteers paid off.
Amber will soon be available for adoption to her forever family from the SPCA while Lincoln will be available through a local rescue, Pit Stop Montreal.