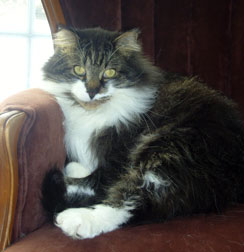 He was six years old when we lost him in June 2009. My mom had rescued him when he was around a year old from the SPCA, he had been very badly mistreated by his first owner. We loved him so much and think of him often! He is a male, was roughly six years old, not declawed, and was not wearing a collar at the time he got lost, after a move from Beaconsfield to Rigaud.

Thanks again and I know it’s such a shot in the dark but I’d feel better knowing I tried everything to find him.