The story of Survivor 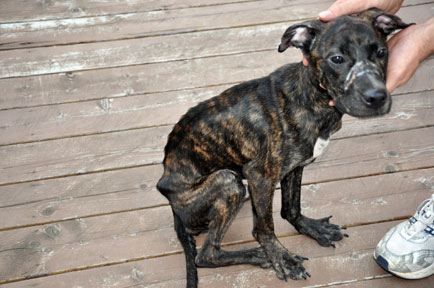 Berger Blanc states that while the SPCA’s mandate is to protect animals, theirs is to protect us, that they are an animal control company, not an animal welfare organization . The story of Survivor is proof that Quebec animals need our protection, much more than we need to be protected from them. And we clearly need an organization we can trust to help when needed. Here is the message that the CAACQ received from Caroline (from French) :

Here is the story of Survivor, a little dog that we found abandoned in the district of Mercier in Montreal on September 12th.

On our way to work by bicycle, we noticed him, not realizing that it was a dog. I was afraid of him at first, I couldn’t imagine that this animal I saw was a dog he was so skinny, scrawny, weak. When we called, he came to us, timid at first, but immediately so affectionate, begging for hugs and attention.

His physical condition was so terrible, to the point where my husband and I cried. I wasn’t able to stop crying. To see him still alive in this state, for someone who has the slightest respect for animals, is simply inconceivable and unbearable. In Montreal. In 2011.

We picked up the car and brought him to the vet. Along the way, good Samaritans gave him food and we were guided to the vet. Everyone who saw him was shocked.

The vet referred us first to Berger Blanc. I refused, saying I would pay the vet fees. In talking with her then, the vet advised us to call them to see if anyone was looking for him, mentioning that she would not bring him there, as their clinic did not trust them and that they did not believe that things had changed in spite of what the City is trying to make people think. And by looking at the list of veterinarians who work there, it was not reassuring…

After getting confirmation that he would come through, despite all he has lived, he did not seem to have any illness other than his malnutrition, we returned home with him. I contacted Berger Blanc and they told us to bring them the dog. I refused because I didn’t want him to be euthanized. Without demanding his description, I was told that either I bring him in, or I should deal with him on my own by making posters… When I said people must contact them when searchiing for their animals, they said no…

So I contacted the CAACQ as the vet advised me. And we are looking after him until we find him a family. This dog is so gentle and loving and so physically and emotionally depleted. I don’t understand that horrible things like this can happen in my city and that people close their eyes. Things must change. I am ashamed of my city and what humans do to animals.

Hoping that things change and that Survivor will help the animal cause.

So sadly, we don’t need to go far to find our own Patrick, and we can’t continue to shut our eyes. If anyone has any information to share about Survivor, please come forward.

UPDATE :-SEPT 19TH : Great news! Survivor is now sporting the new name Chiko, and has been adopted by his rescuers!

UPDATE : Much as they loved him, his rescuers couldn’t keep him, he’s looking for a new loving home via Sophie’s Dog Adoption. 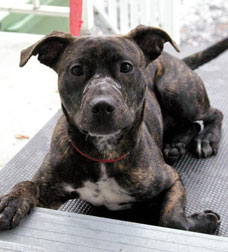 Final Update : It took some time, but handsome Chiko finally did find a home!