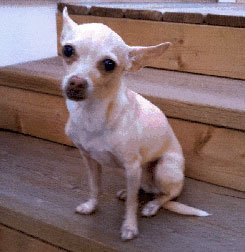 This little chihuahua that I had posted as found in Laval was unfortunately claimed by people posing as the owners, likely upon seeing that there was a large reward for her return. Called out on it, they now claim that Emma is lost again!!

This message from Emma’s family :

Attention!! Someone claimed my dog​​, saying he was owner and now says he has lost her again! : @ Grr …

I still don’t have my dog ​​and the person who took her ​​and lost her again is named Stéphane Savaria. If you have any information or you think you have seen my dog ​​please 🙁 help me find him, there is a family who have been in distress since a week 🙁