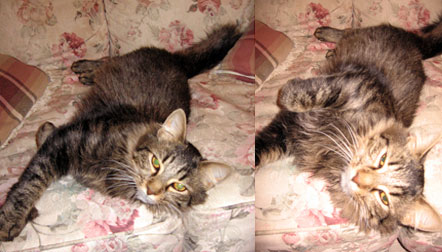 Hi, I’ve found a young male long fur tabby in Chateauguay on St. Joseph near Champlain. He was living outside for about 3 weeks but I’ve taken him in as I don’t want to see him spend his days out in the rain and cold. Unfortunately I can’t keep him as I have two other older cats. I’ve been keeping them separated but it’s not fair that he should have to be locked in a room by himself. He’s very friendly and very gentle, loves to cuddle. He is not neutered and he has his claws. When I found him he was wearing a flea collar (which I took off as he’s grown since it was put on). If I can’t find the owner then he needs to be adopted out as I can’t bear the thought of bringing him to the SPCA as he would make someone a wonderful pet.