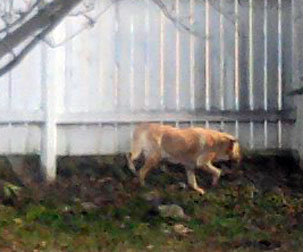 Dog found in Boisbriand, area of on Grande Allee and Chemin de la Rivière Cachée, just behind the grounds of Hydro Quebec. According to witnesses, the dog (golden labrador) has beenthere since the summer, so for several months. We have been tryiing to catch him but without success, he is fearful but doesn’t seem aggressive. The SPCA Laurentides are supposed to help as soon as possible. They will try to catch him with a live trap. I could feed him this morning but couldn’t get near. Thank you!

UPDATE : Blanca (her new name) was caught back in December and from the information gathered, she had been a stray for about 6-7 months, living on her own behind Petro-Canada on Grande-Allee in Boisbriand. She is a lab mix, approx 4 yrs old, and has been with us ever since but we’re trying to re-home her. Vaccinations and all vetting are all up to date but needs to be fixed.