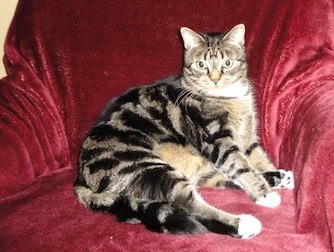 His name is Mr. Baggins. He is a beige and chocolate tabby with huge eyes. He weighed 20 lbs when he left, but it’s already been 10 days. He is neutered, but has his claws. He is very shy and hides under things very often. He has white paws, and white on his chest. Lost on Décarie boulevard, Montréal  H4A 3J8

Thank you so much. I am almost sure that it’s too late, but you don’t know if you don’t try.