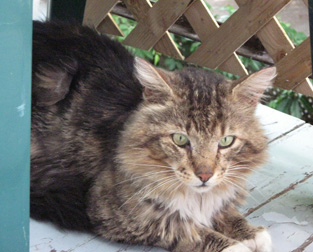 I am trying to locate a cat that’s been stray for years, who stays in the alleys of De La Roche, Brebeuf, Chambord Street between Mt-Royal and Gilford. He’s striped with white paws (now gray). He’s extremely thin and the hair that remains is full of knots. So he needs to be treated urgently. I can’t approach him, or draw him near with food, because he refuses. Someone is feeding him, knows where he stays most often? I could put a cage-trap there. It looks like the cat in this picture, but in a much more precarious state. Thank you.

UPDATE JUNE 6TH : From Raymonde (translated) : Finally he’s started to come onto my balcony. So I’ll try to catch him, and bring him to a vet. I hope to find him an adoptive family as he deserves it after all these years as a stray. If you know someone who’s interested to take him…

UPDATE + PHOTO – JUNE 9TH : From Raymonde (translated) : He’s been stray for years, so useless to look for his owner. I’m ready to pay for his vet care and sterilisation but I hope with all my heart that someone will want to adopt him after. He’s a male, tabby beige/black, who deserves to have a better future.

UPDATE  – JULY 25TH : Auguste as he had been dubbed, had finally been caught, but sadly had tested positive for FIV. After all these years surviving on the street, it was decided that not only would finding a home for him prove difficult but that he would not adapt very well to life as an indoor cat, so it was decided that he needed to be euthanized. A decision that surely was not easy, His fate is that of many cats that are left to the wind. RIP beautiful boy.