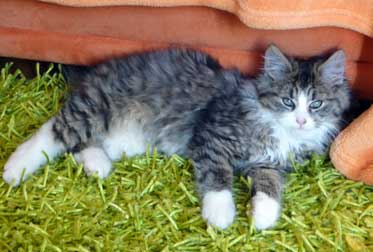 Young neutered male cat, aged 10 months, has been lost since the morning of June 2, 2010 (last Wednesday) in Outremont, corner of Bernard and Lajoie. He’s a gray tabby with white paws, tip of the nose, chest and belly. Not very big, it’s clear that he’s still adolescent. There’s also a bit of beige on his legs. His tail is long and thick for a cat, whose fur is rather short or medium long. His eyes are bright green and almond shaped. His nose is pink and he has very bushy white whiskers.

He was wearing a dark blue elastic collar without a tag, but maybe he ended up losing it. He went out in the morning as usual and didn’t return. Since then, I search every day in the streets and alleys but without success.

His name is Sammy and he knows his name. He’s not too trusting and normally doesn’t let you take him, but when he knows you, he is cuddly and playful. I miss him terribly, as do my children.

PS: The photo was taken a few months ago, so he’s actually a little bigger and his hair is a bit shorter.