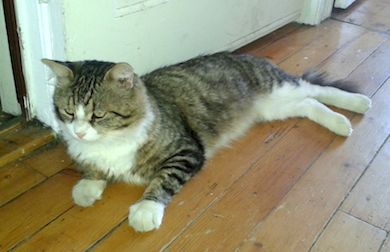 I lost my cat named Igor, he is aged between 4 and 5 years. He is a neutered male. He was let out inadvertently on Thursday, April 24, 2014 during the evening. He has medium-long/long hair; caramel black stripes on his back, legs and head and white under his belly, on his neck and paws. He has a mane around the head (like a lion) He is a very sociable and curious cat.

He was seen for the last time in the alley between Claude and Newmarch east of Hickson Street.