A very special request – and a big thank you! 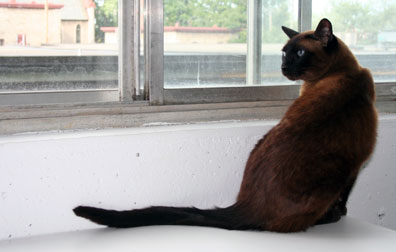 I am exhausted this morning. After running this blog for over a year now, it finally happened! Doing follow up on my listings I learned that this cat was going to have to be brought to the Berger Blanc this week, as the family keeping him were leaving on vacation. I couldn’t bear the thought of this, and time was short, so I offered to take the cat on. Now he is holed up in my workspace and I will likely spend the day there trying to get some sleep!

So, what I’m hoping is that people will be able to contribute, so this wonderful cat can pass inspection before being adopted. I’ve run this blog with no financing up until now, and therefore don’t have the funds to have him checked! The family he came from contributed food and a bit of money but not enough to cover all the costs. So I’m passing the hat, and hoping that a few dollars from a few people will add up to cover his expenses. I’ve not had a good look yet, he appears healthy and already operated, but needs to be checked for any diseases, and should be vaccinated. Of course you’ll all be updated on his progress and his outcome! Thanks!

(Note : There is a button on the sidebar that will take you to the donate page)

UPDATE – JULY 31ST : I’ve nicknamed my little charge Bean, his colour reminds me of the perfect blend of coffee beans, and he purrs like a grinder, I think fatigue was partly responsible for that decision… as he’s far too elegant for that moniker. I spent the afternoon with him, and he curled up on my lap and napped, and ate, and snuggled… and chatted a bit, but mostly snuggled.

UPDATE – AUGUST 6TH : Bean has found a new home and a more dignified name! Thanks to contributions from a few kind people that helped with his vet care (55$ donated!), and a well placed ad by another (thanks Isabelle!), Amadeus as he is now named, has found a great new home with Eve-Lyne. As well, he’ll have the company of golden retriever Mona and another kitty, Raphaël. Yesterday he received a clean bill of health and wonderful attention from Clinique Vétérinaire Plateau Mont Royal. He then had a bit of a harrowing car ride last night, and this morning I received the great news that he’d settled in quickly and had definitely found his permanent home. No more lonely days! I’m thrilled that it didn’t take too long, especially since I had already become attached to him in the short time he was with me! A big thanks to everyone who got involved!