Zoya has been found!

After 14 months without news of Zoya and a hard winter, we can say that it is a miracle. Especially since she was never let outside of the house (she had followed the babysitter unknowingly into the backyard and she had not seen and had closed the door on her). It is assumed that Zoya walked away because she had been frightened by something and then couldn’t find her way. In addition, she is no longer young and she had to suffer from cold, malnutrition and stress. She was only a few blocks from home, it was a gentleman who found her his property and who called the SPCA. We had looked day and night in all the neighbouring streets calling her and we went door to door repeatedly. We wished we could have more information on how she was able to survive all this time but the identity and address of the gentleman seems to be confidential.

Zoya immediately regained her habits, and on her arrival home she was really happy and glad to see the whole family. Given what she had to suffer, she is doing well. She is very emaciated, she had beautiful fur, it has dulled, and she has totally bald patches in places. But the vet found her in good health despite her thinness, and tests revealed mild anemia. With good food, this should be corrected. And she has a chip now, with her name and address.

During these 14 months, we have not stopped looking for her. We were really shocked by her disappearance. I have visited your site, Kijiji and those of the SPCA every day, without missing one. Judith responded to all the calls and had seen more than a dozen cats that were not Zoya. She even went to Ste-Agathe to see a cat, supposing that Zoya could have been taken by someone and then later abandoned. 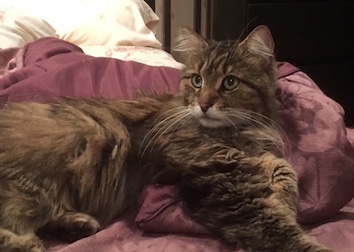 It’s a happy ending, so one should never lost hope. Here is Zoya upon her return.